The Face of Airbnb, New York City - Airbnb as a Racial Gentrification Tool

A Report by Murray Cox

In this new study, the data activist project Inside Airbnb has racially categorized the host photographs in all of the predominantly Black neighborhoods of New York City, enabling unique quantitative data on how the demographic of Airbnb hosts compare to each neighborhood, and what this means for those communities, many of which are rapidly gentrifying.

UPDATE: A year later after releasing this landmark report, we look at new research on the damaging impact of Airbnb in residential communities, and review and respond to Airbnb's criticism and response to the study. Read: "A Year Later, Airbnb as a Racial Gentrification Tool". 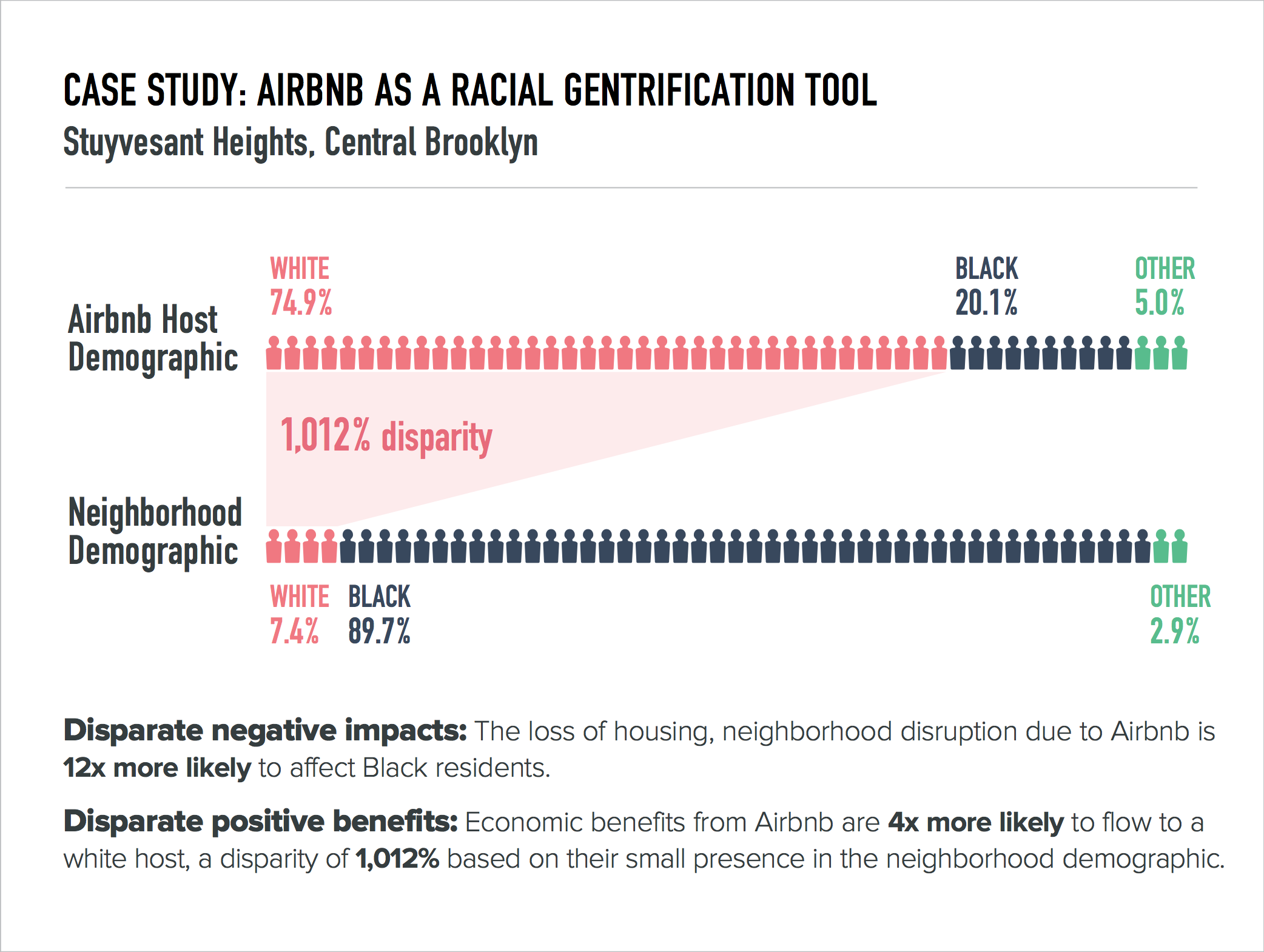 The full report can be viewed along with exclusive reporting by Brooklyn Deep or downloaded directly.

Quotes from elected officials in the New York City Council and New York State Legislature; as well as from representatives of housing and tenant rights advocacy organizations.

"For years, Airbnb has peddled its alternative fact-based narrative of helping the middle class to anyone who would listen," said Assemblymember Linda B. Rosenthal (67th Assembly District D/WF), author of the new New York State law allowing steep fines for advertising illegal units on Airbnb.
"However, the City's increasing homelessness and housing unaffordability crisis that strike at the heart of the middle class are, in fact, being exacerbated by unit conversions and illegal rentals. This report vividly demonstrates Airbnb's complicity in the increasing gentrification in historically African-American and Caribbean-American neighborhoods and displacement of its residents. It is imperative that Airbnb be held accountable and that we root out illegal rentals that are disrupting neighborhood housing markets," she said.

"This data is explosive, and it underscores why we need to make policy based on facts, not promises or PR campaigns," said Manhattan Borough President Gale A. Brewer. "Murray Cox and the other civic technologists who have labored to shed light on Airbnb's activity in New York deserve our thanks and congratulations. They've done a real public service."

"Airbnb is making life harder for New York City’s renters. In recent years, the home-sharing app has garnered an ever-expanding worldwide user base and gained traction throughout the five boroughs. As an assemblyman representing Bedford-Stuyvesant, a neighborhood with 7% of all New York City Airbnb listings, I know that we must protect our housing laws and this report exposes the racial disparity between the host community and the demographics of the neighborhood."

"Crown Heights is the epicenter of gentrification and displacement in New York City. We cannot stand to lose a single apartment that could provide stable affordable housing for a Crown Heights family to uses like short term rentals. This most recent Inside Airbnb report only exacerbates the frustration we, the members of the community, have towards platforms like Airbnb.

Not only do these tools intensify gentrification by reducing the number of apartments available to rent, but they do so while claiming they are generating wealth for long term community members and people of color. Unfortunately this report demonstrates these claims are completely baseless. The Crown Heights Tenant Union will continue to fight back against all threats to affordable housing in our community, including companies like Airbnb."

"Murray Cox, the founder of Inside Airbnb, yet again, exposes how Airbnb continues to profit at the expense of NYC's residents and neighborhoods, particularly in those gentrifying communities that desperately need affordable rental and homeownership opportunities to prevent displacement of long term residents. While the correlation between rising rents and popular Airbnb neighborhoods has been well documented, The Face of Airbnb, New York City, further drills down to examine Airbnb use on a neighborhood-level in historically black and immigrant communities to reveal wide racial disparities in who benefits most from Airbnb use. Airbnb is unquestionably exacerbating NYC's housing crisis and forever changing the character of our neighborhoods."

"Murray Cox has once again exposed the destructive impact that Airbnb has on New York City neighborhoods. The report, The Face of Airbnb, New York City, documents the role that Airbnb plays in the gentrification of historically black and brown neighborhoods and the disproportionate benefit obtained by white hosts. Airbnb continues to contribute to the exacerbation of New York City’s housing crisis by providing another vehicle for the displacement of long-term residents and community members. If New York City is serious about preserving affordable housing for New Yorkers, it must step up enforcement against Airbnb."

"We already knew that Airbnb has been instrumental in transforming residential communities into hotels, however the new report The Face of Airbnb, New York City gives us the data we need to show that Airbnb is also responsible for extracting wealth from Black neighborhoods."

"This groundbreaking analysis quantifies what so many New Yorkers have already experienced: That AirBnB is an engine of displacement, not opportunity, for communities of color. Illegal hoteling places tremendous strain on an already under-supplied housing market and exposes neighbors to real safety concerns. This study shows that black New Yorkers in neighborhoods across the city bear the cost of illegal hotels but do not receive anything close to a proportionate share of the gains. It’s yet more evidence that reining in illegal short term rentals must be an affordable housing policy priority."

"Airbnb touts a self-serving myth that their service helps predominantly black neighborhoods in New York City. But once again the facts prove that the opposite is true. Far from helping black neighborhoods, Airbnb sends gentrification into overdrive, increasing racial disparities and putting even more pressure on long-time residents. Enough is enough – New Yorkers don’t need illegal rentals driving up their rents and transforming the communities they call home."

"This study provides valuable in-depth analysis proving that many claims made by Airbnb regarding home-sharing services are inflated or outright false. In fact, they harm communities and decrease affordability throughout the City. This data shows the true cost of Airbnb in our communities, and that this company only further contributes to gentrification which pushes long-standing residents out of their communities. The information found here is invaluable to the fight for affordability in New York City."

"I applaud Inside Airbnb for bringing to light a little-known driver of gentrification in our city. Illegal short-term rentals secured through platforms such as Airbnb artificially reduce the housing supply and, as this report shows, disproportionately benefit gentrifiers over long term residents. The racial disparities in the economic benefits gained through Airbnb are disturbing and contribute to the fragmentation and displacement of black and brown communities in New York City. Government must act decisively to enforce laws against short-term rentals and should consider other policy remedies for this problem."

Includes quotes from elected officials in the New York City Council and New York State Legislature; as well as from representatives of housing and tenant rights advocacy organizations.

Adding data to the debate

Inside Airbnb is a mission driven project that provides data and advocacy about Airbnb's impact on residential communities.

We work towards a vision where data and information empower communities to understand, decide and control the role of renting residential homes to tourists.